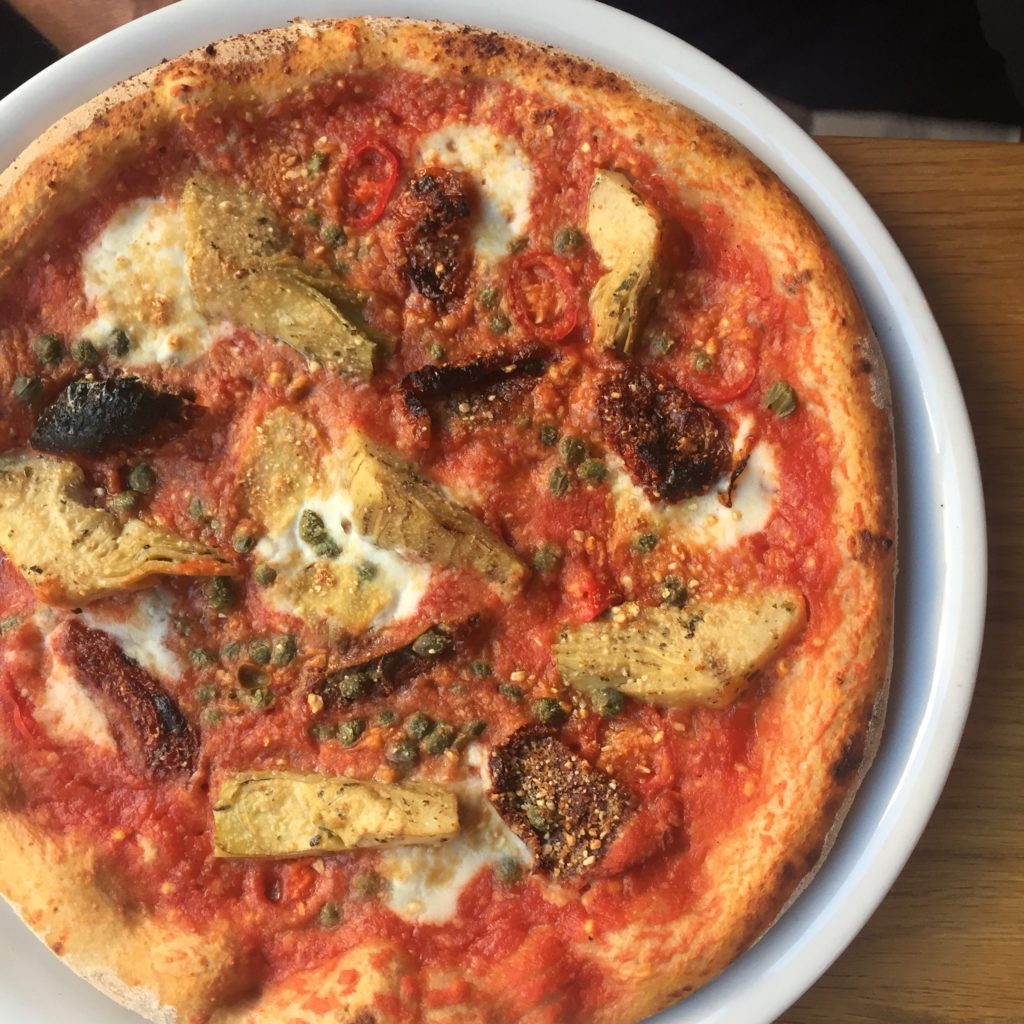 Dan and I had a rare and precious evening out last night courtesy of a very special babysitter (thank you). We decided to try out The Flat in Exeter which is somewhere I keep hearing about and thinking we must go! 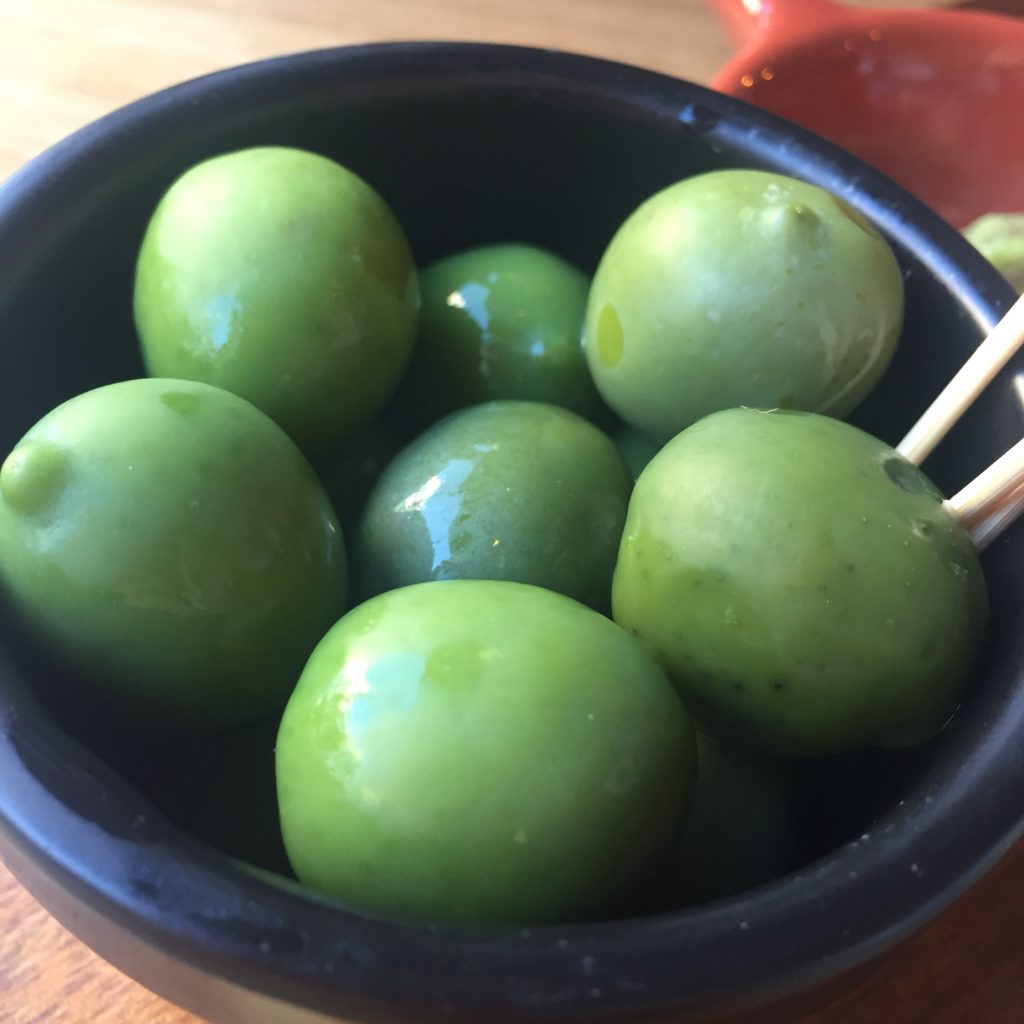 So it’s half way down Fore Street and we were lucky to get a parking spot right outside. There was just one other table full when we got there at eight (on a Saturday night) but it kept filling up as we were there and a couple of people popped in for takeaway. 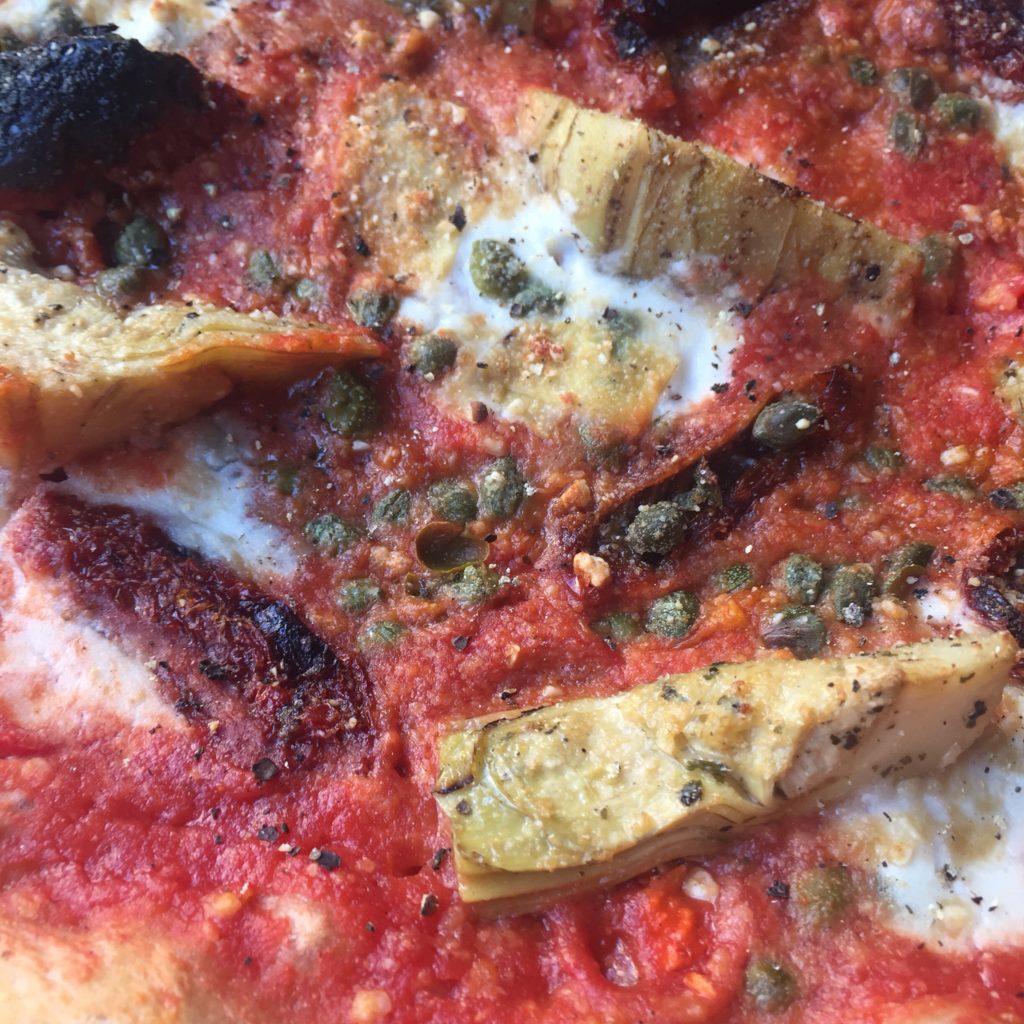 We shared olives and nuts for a starter and a pizza each for main. Dan opted for ‘Salty’ which is pictured at the top and directly above. I went for the ‘Olive Tree’ pictured below. 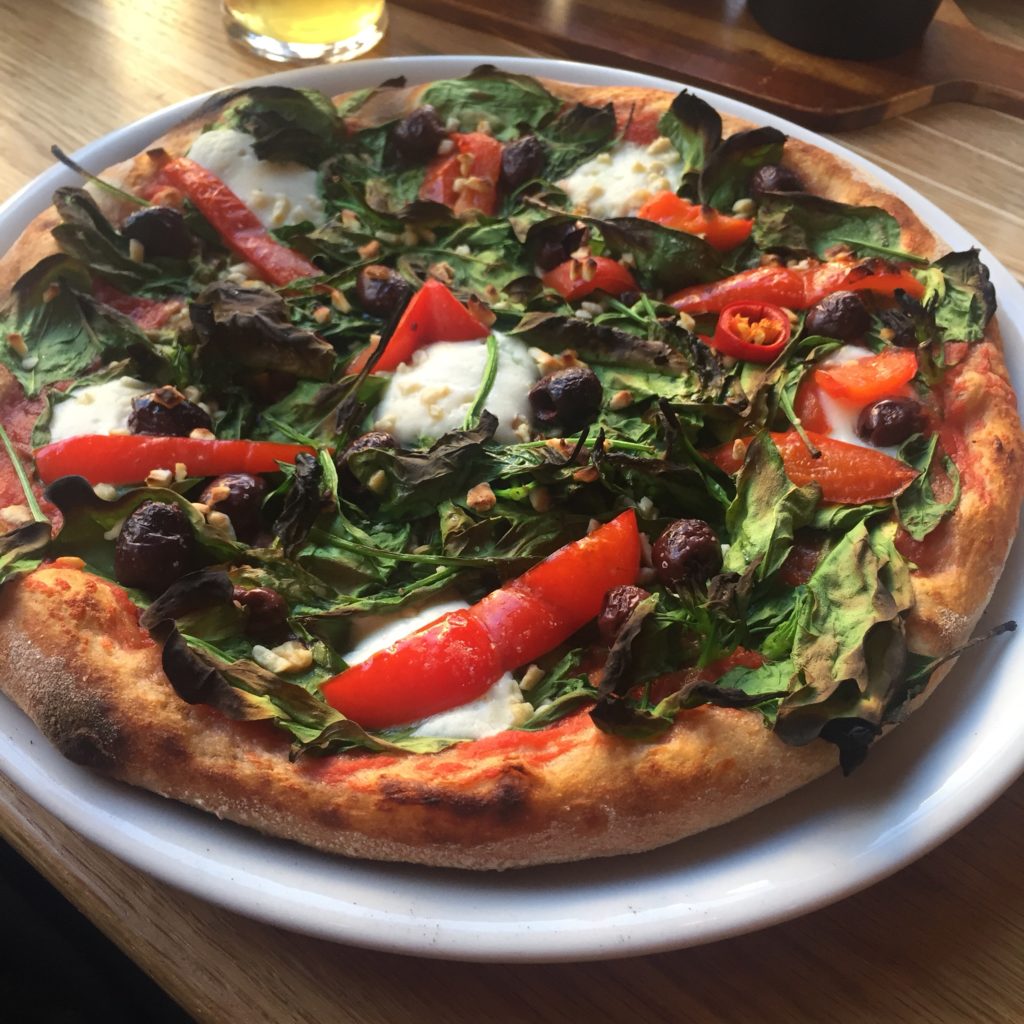 Dan’s ‘Salty’ pizza had sun dried tomatoes, capers, artichoke, fresh chilli and vegan Parmesan. The 10″ size was £9.50. My ‘Olive Tree’ was the same size and price and had olives, spinach, peppers, mixed nuts and fresh chilli. I think I’ve read they make the vegan cheeses themselves. 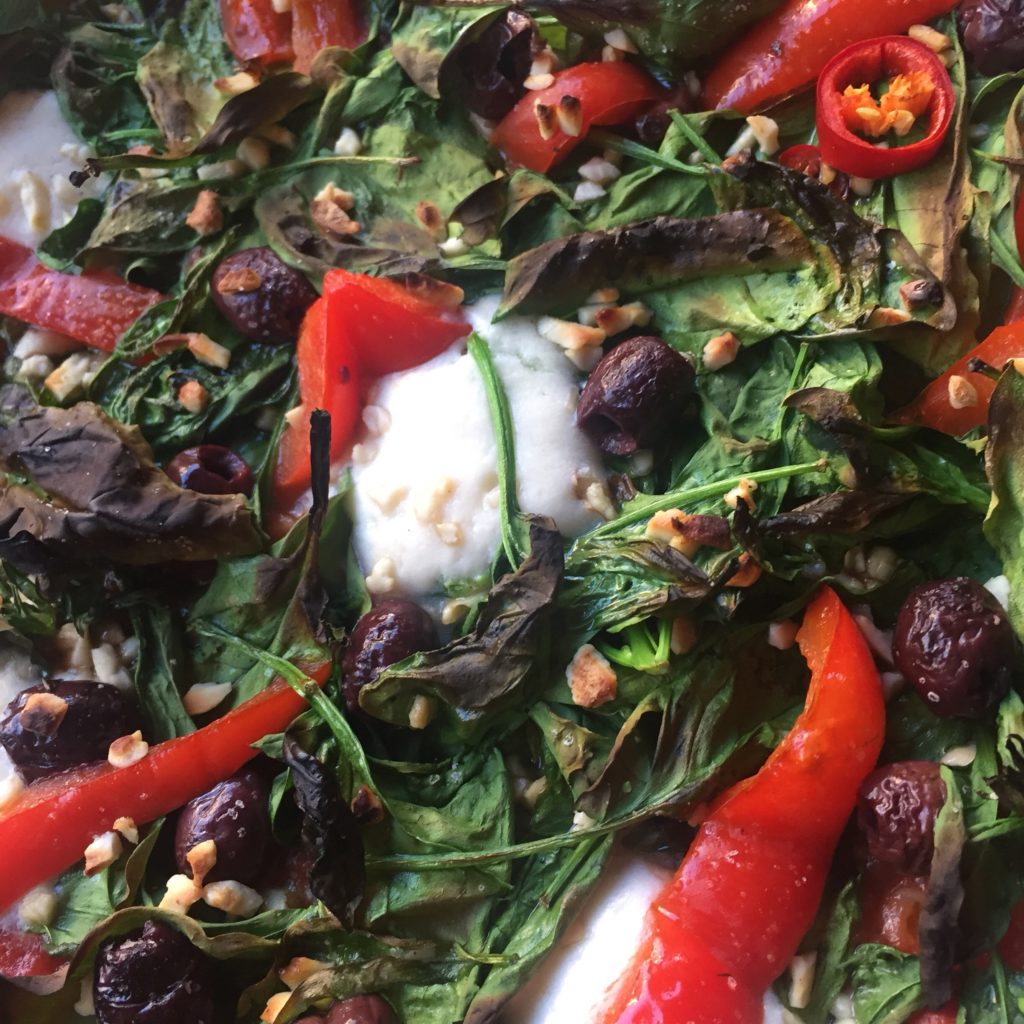 Dan liked his and I preferred his to mine too! It was hotter and quite tasty. The lager was lovely too – an organic vegan lager from Laverstoke Park Farm. 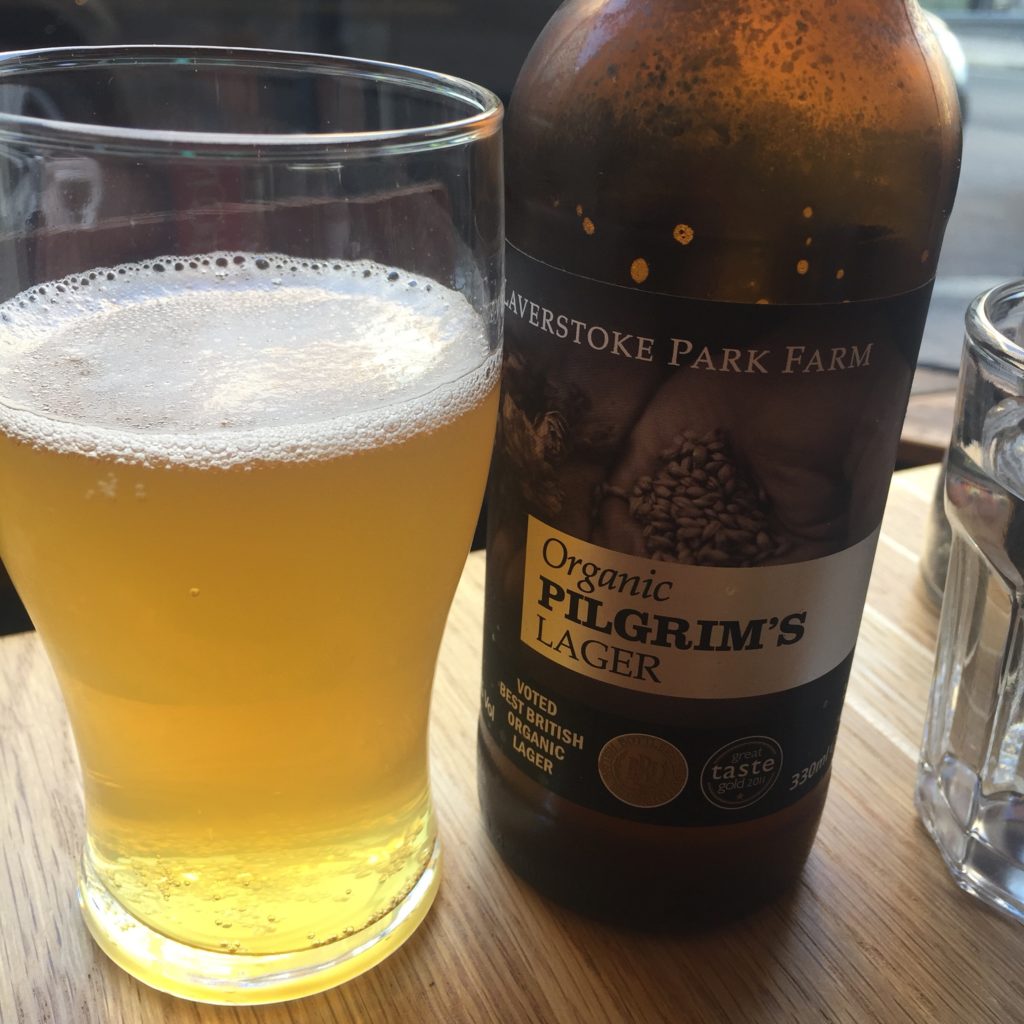 I’d have had a latte to finish if that had been on the menu and the dessert choice was pretty limited so we skipped that. Service was friendly and super quick when we went in but after that we were left to our own devices. And it was unsurprisingly sauna-like in temperature for a small eatery with a massive blazing pizza oven! 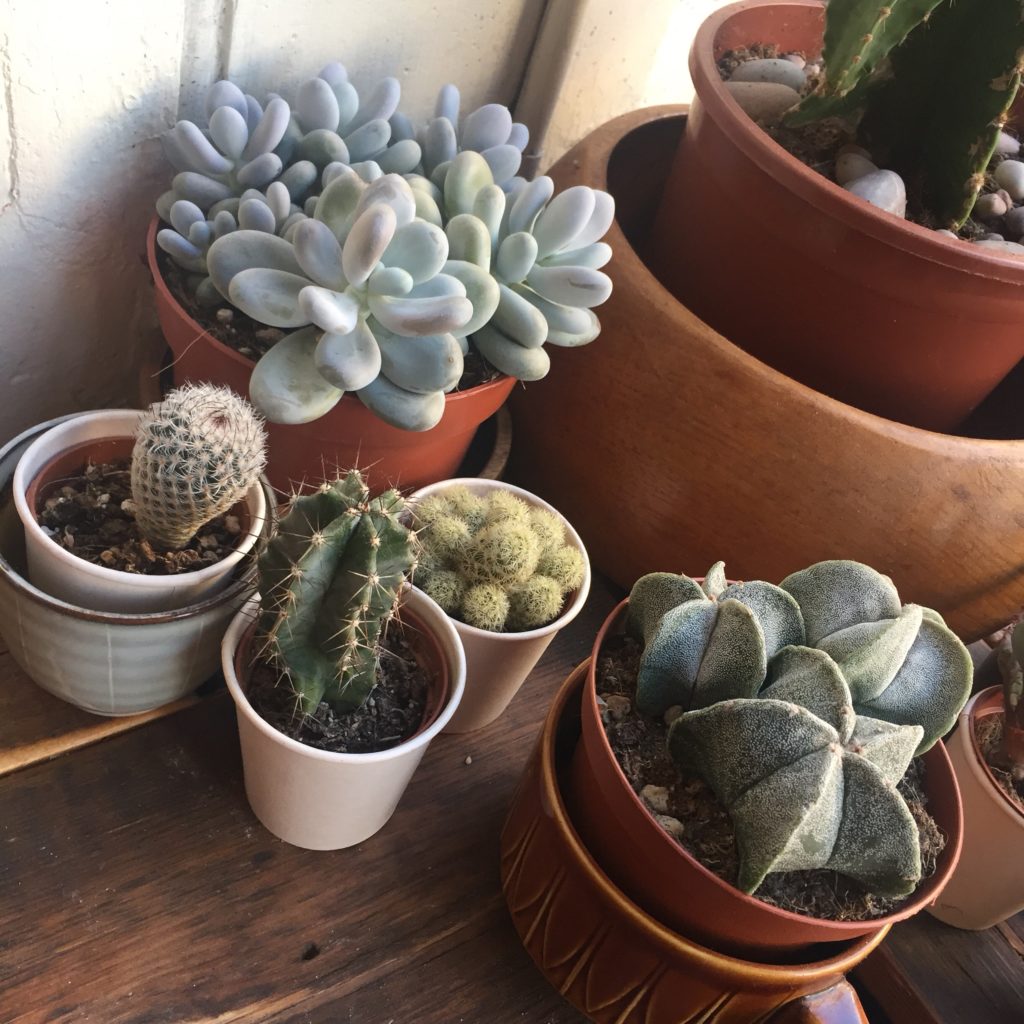 You can find me on Facebook as well as twitter and Instagram. If you’re specifically looking for more vegan stuff in Exeter, check out my review of Exeter Sacred Grounds and don’t miss Exeter’s Vegan Chip Shop!

Plus Exeter has it’s very own monthly vegan market now too. It may be a small city in Devon but it’s definitely punching above it’s weight in the UK as far as vegan offerings go. I would love to hear from you if you would like me to review your vegan goodies or venues on here so do get in touch. 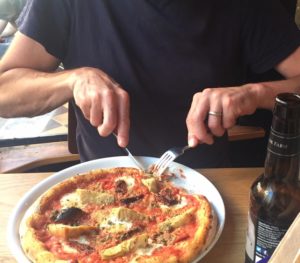 8 thoughts on “The Flat – Vegetarian & Vegan Pizza in Exeter (Review)”